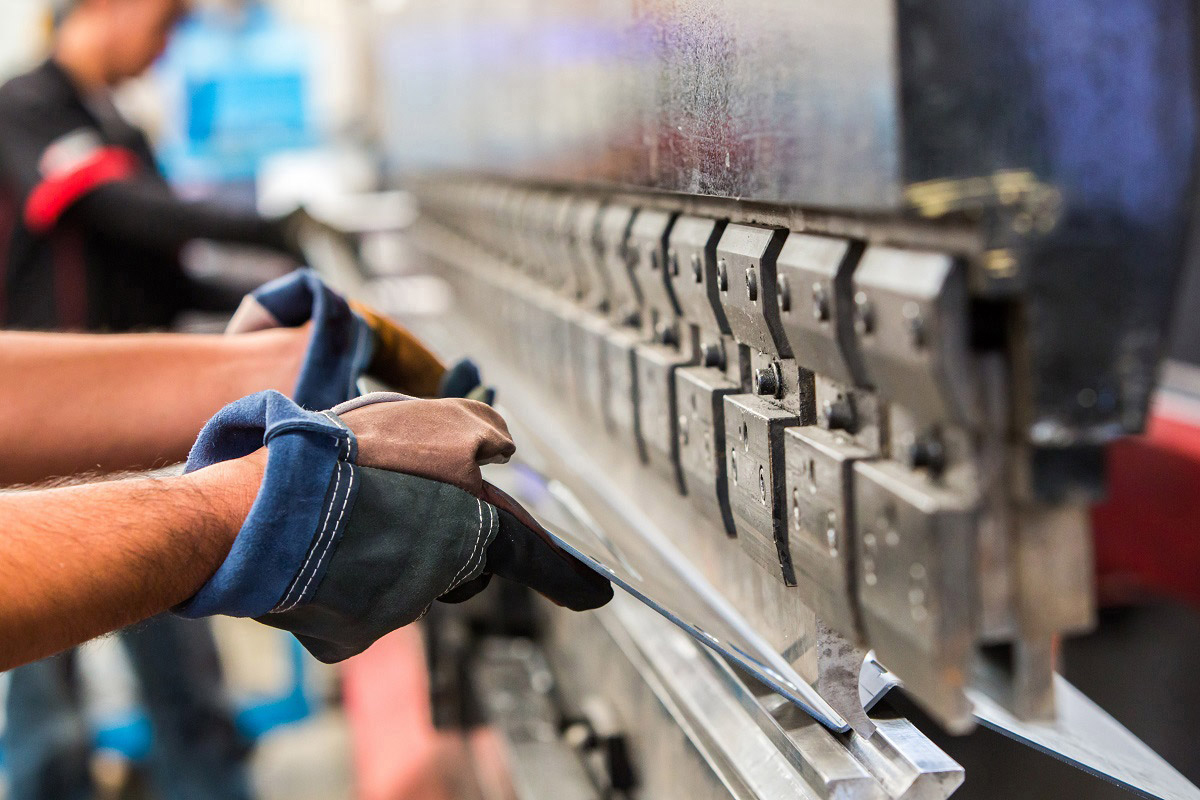 Through the cold-forming process of metal stamping, sheet metal is transformed into different shapes. The metal-stamping process uses a combination of dies and stamping presses to convert pieces of flat metal into usable shapes for a variety of industries.

From the automotive industry to aerospace projects to medical machinery, many industries throughout the globe heavily rely on metal stamping for their equipment. There is an increasing need worldwide for mass-produced quantities of complex parts, and metal stamping is a cost-efficient way to do so.

Metal stamping is a complicated process that can be completed through a variety of
metal-forming techniques. Some examples include bending, punching, blanking, spinning, hydroforming, or piercing the metal to alter it to the ideal shape.

In this article, we’ve outlined the metal stamping process and some different types of metal stamping techniques to help you get a better understanding of how this process works.

What Is Metal Stamping? 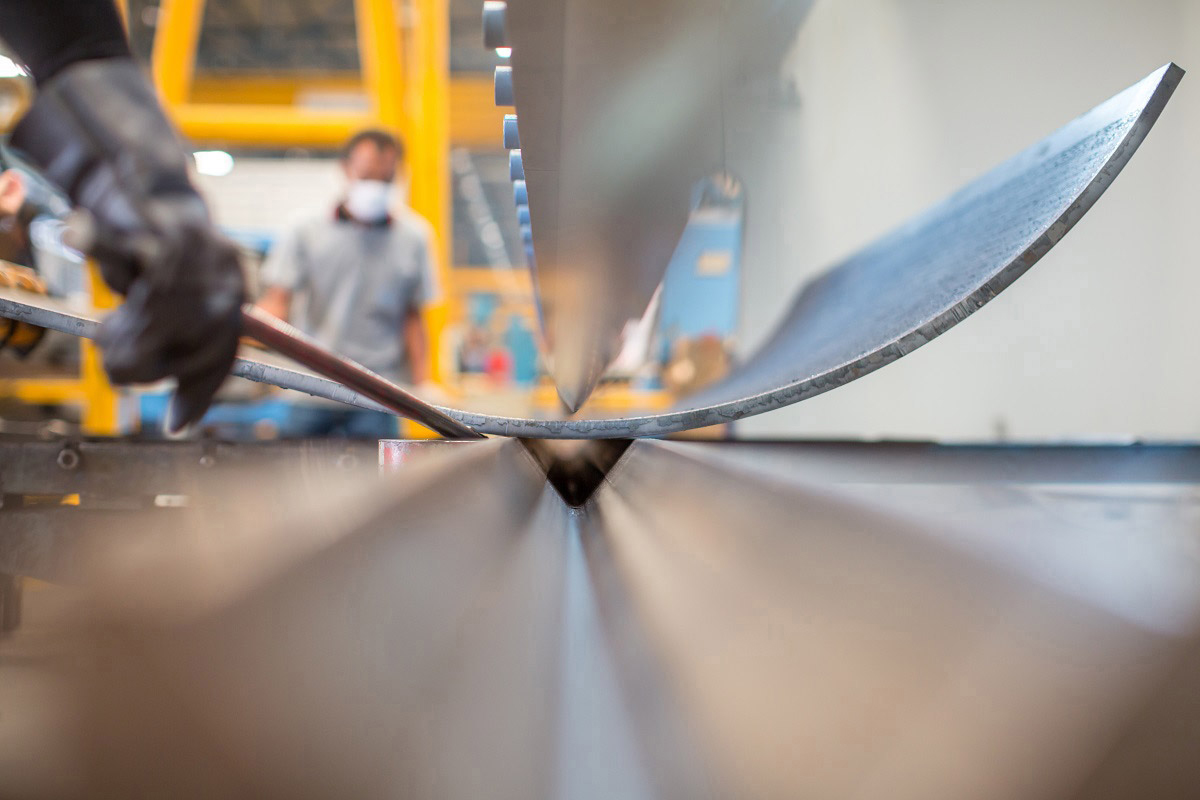 The metal stamping process also referred to as metal pressing, consists of taking flat sheet metal and feeding it into a stamping press. This press then uses pressure and die to transform the metal into the predetermined shape.

To ensure the metal piece turns out the way it is supposed to, stamping professionals need to use the design tool that comes with CAD/CAM engineering technology. These designs must be as accurate as possible for each part to come out looking and operating how it should.

Because the metal stamping process can turn out a high volume of the same part in a short amount of time, it is used in a variety of industries. 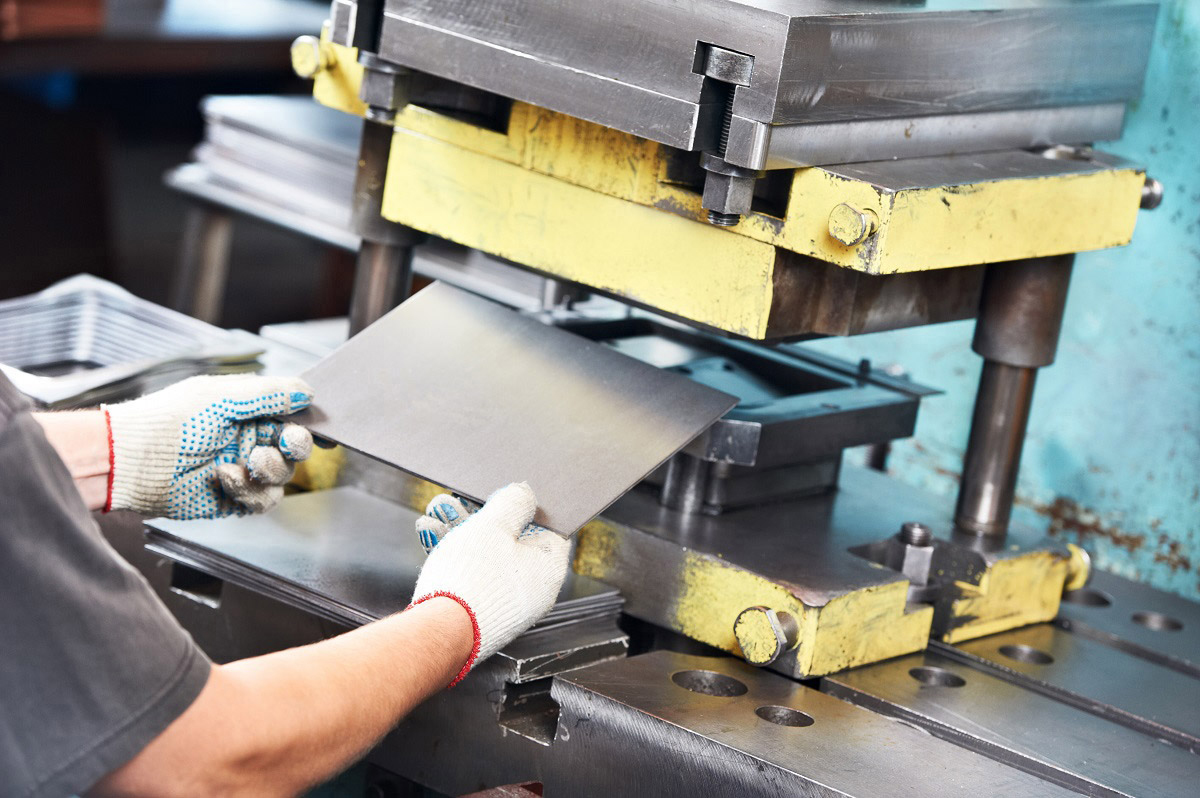 There are a variety of metal stamping techniques that are utilized for particular applications. We’ve outlined some examples below.

This metal stamping technique breaks down the process into a series of stations that each serve a different function. The stock strip carries the part from one station to the next until it is finished and removed from the strip.

The original metal strip travels from its coil and makes its way into the die press. From there, the metal moves horizontally across each station. As soon as the desired bend, punch, or cut is made, the part moves onto the next station until it’s completed.

The part is still connected to the metal strip while it is being altered, so each movement must be as accurate as possible. This precision and accuracy assure that the end part is accurate and usable.

Progressive die stamping is a beneficial way to produce mass quantities of parts at a low cost, making it an attractive option for many. The die lasts for a long time and it’s easy to repeat the process as many times as needed. This type of metal stamping also produces minimal wasted scrap.

However, without a high level of precision and accuracy during progressive die stamping, the parts may not be accurately made.

Another type of metal stamping is transfer die stamping. It is similar to progressive die stamping, but a mechanical transport system moves the part from station to station instead of an automated strip. This type of stamping is useful for making parts that need to be free from the metal strip during the stamping process.

This may be a single die on its own or it may require multiple dies or machines in a row to create a makeshift production line.

The lower tooling costs associated with transfer die stamping make it an excellent option for production. They are also versatile and can produce features such as cut-outs, ribs, knurls, threading, and pierced holes. This means that no secondary operations are required, further cutting back on cost.

Transfer die stamping is used in markets such as agriculture, automotive, locomotive, electronics, medical, recreational vehicles, and more. It’s beneficial in creating larger, bulkier parts that may require the use of multiple presses.

This technique uses cold extrusion and it is a single-step process, resulting in a lower fabrication cost.

Fine blanking is typically completed using a hydraulic or mechanical press, or a combination of the two. There are three recognizable movements used in the fine blanking process:

The product is manufactured and needs to have complete contact with the surface on the part’s edge to be effective.

One example of a part that is often made using fine blanking is a gear. Gears require flatness in certain areas and every tooth needs to be fully engaged to be effective, making fine blanking the perfect candidate for this type of production.

Four-slide stamping, also referred to as multi-slide stamping, uses four tools simultaneously to form the piece into the proper shape. As the metal sheet is fed through the four-slide, it is quickly bent by each shaft.

It is ideal for producing products that require intricate cuts or complicated bends. While other metal stamping techniques use a vertical slide during production, four-slide stamping uses four different sliding tools to shape the metal piece.

The tool slides used in four-slide stamping are highly productive and straightforward, meaning this is an ideal method for creating complex or multi-part bends, even bends that are larger than 90 degrees. Multiple bends, punches, folds, or cuts can be completed in just one step.

Another advantage of four-slide stamping is the tooling itself is relatively inexpensive and there is minimal waste produced during the process. 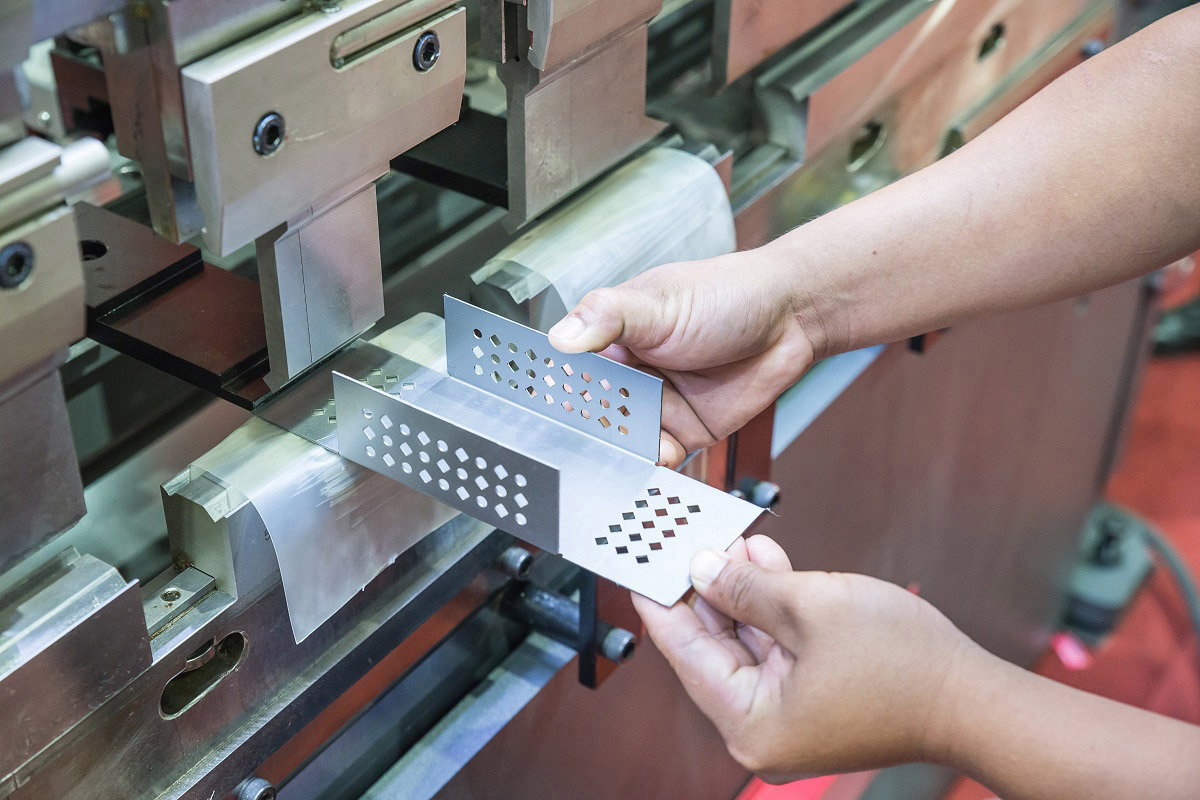 Stamping presses play an integral role in the process, and there are three common types: mechanical, hydraulic, and mechanical servo. The distinction between the three types comes from the power source.

In most cases, the stamping press is linked to an automatic feeder that moves the sheet metal through the press. We’ll get into detail on each type of stamping press below.

Mechanical stamping presses have a motor that’s connected to the mechanical flywheel. The flywheel then stores that energy to help the machine operate. These presses can produce a variety of punch sizes, ranging anywhere from 5mm to 500mm depending on the specific press being used.

The press stroke length is kept as short as possible because it has such an impact on speed. On average, each stroke is 2 inches.

The operator of the mechanical press will use electronic control, a clutch, and a brake to help engage and disengage the press drive as necessary.

Mechanical stamping presses are most often used to create simple and shallow parts made from coils of sheet metal, most notably for large production runs for transfer and progressive stamping.

As the name implies, hydraulic stamping presses use the hydraulic fluid as the power source. The technology used in hydraulic presses has significantly improved over time, with each improvement offering an upgrade in electronics and valves.

The hydraulic pistons release fluid that has a proportional amount of force to the piston head’s diameter. This allows for a high level of control over how much pressure is applied at any given moment. Despite so much flexibility in its stroke and speed capabilities, hydraulic presses can still deliver full power at any point in the stroke.

The pressure used in hydraulic presses may be preset by the user. The velocity can also be tweaked to adjust how fast the slide travels while the die closes. When the right pressure level is achieved, the valve helps activate pressure reversal to avoid overloading.

Hydraulic presses range anywhere from 20 tons to 10,000 tons. Their stroke sizes are anywhere from 10mm to 800 mm. This type of press is ideal for creating small, intricate parts thanks to its changeable stroke length and consistent pressure.

Mechanical servo stamping presses don’t use flywheels as their power source. Instead, they rely on high-capacity motors to ultimately create intricate designs at a faster pace than standard hydraulic presses.

Servo presses are highly programmable, making it easy to have control over the stroke, slide position, motion, and speed of the press. These machines operate on a link-assisted drive system or a direct drive system.

Their high speed and high levels of customization make mechanical servo presses the most expensive option out of the three. 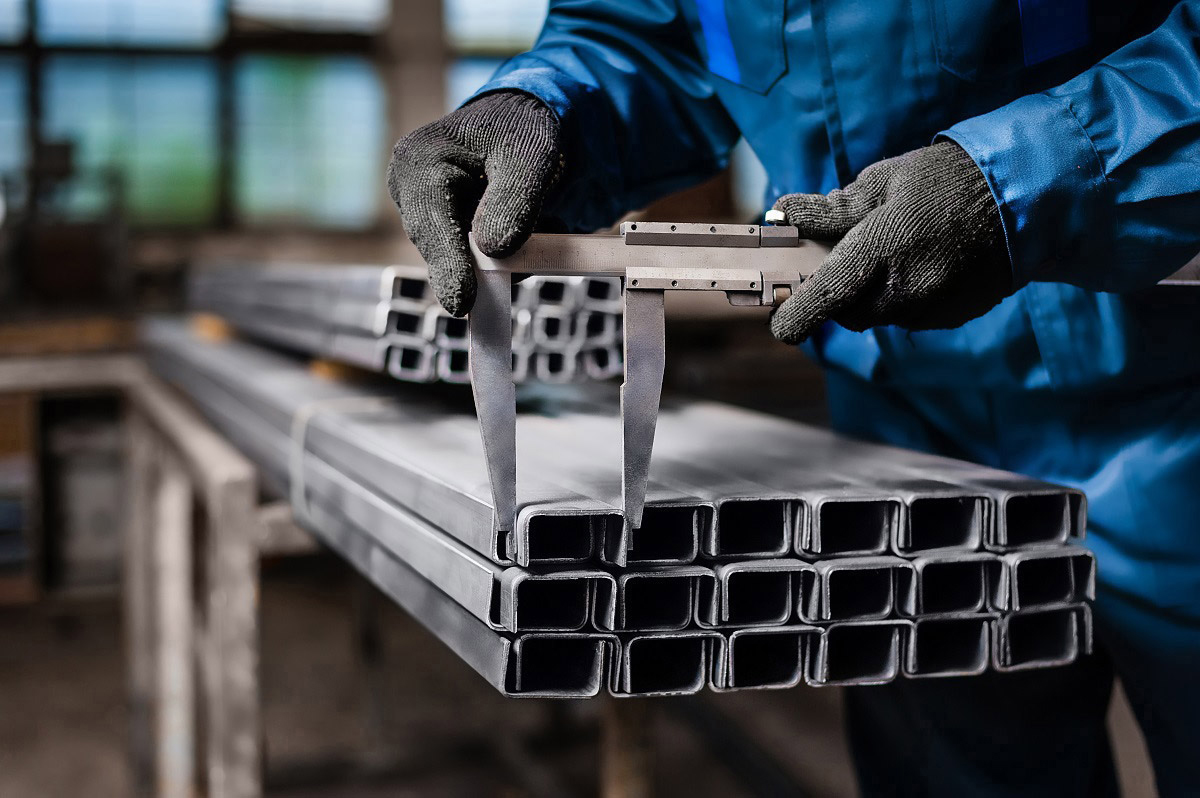 Combination dies use cutting and non-cutting operations in one stroke. For example, a combination die may produce both a cut and a flange when shaping a metal blank.

The other type of die used in metal stamping is multi-station dies. Progressive dies and transfer dies are included in this category. Examples of operations resulting from this die-set include cutting, punching, or notching.

Another noteworthy die used in stamping presses is steel rule dies, commonly referred to as knife dies. This type of die was first used on soft non-metal materials such as paper, cardboard, or leather. Over time, knife dies have also been utilized on copper, brass, and aluminum. 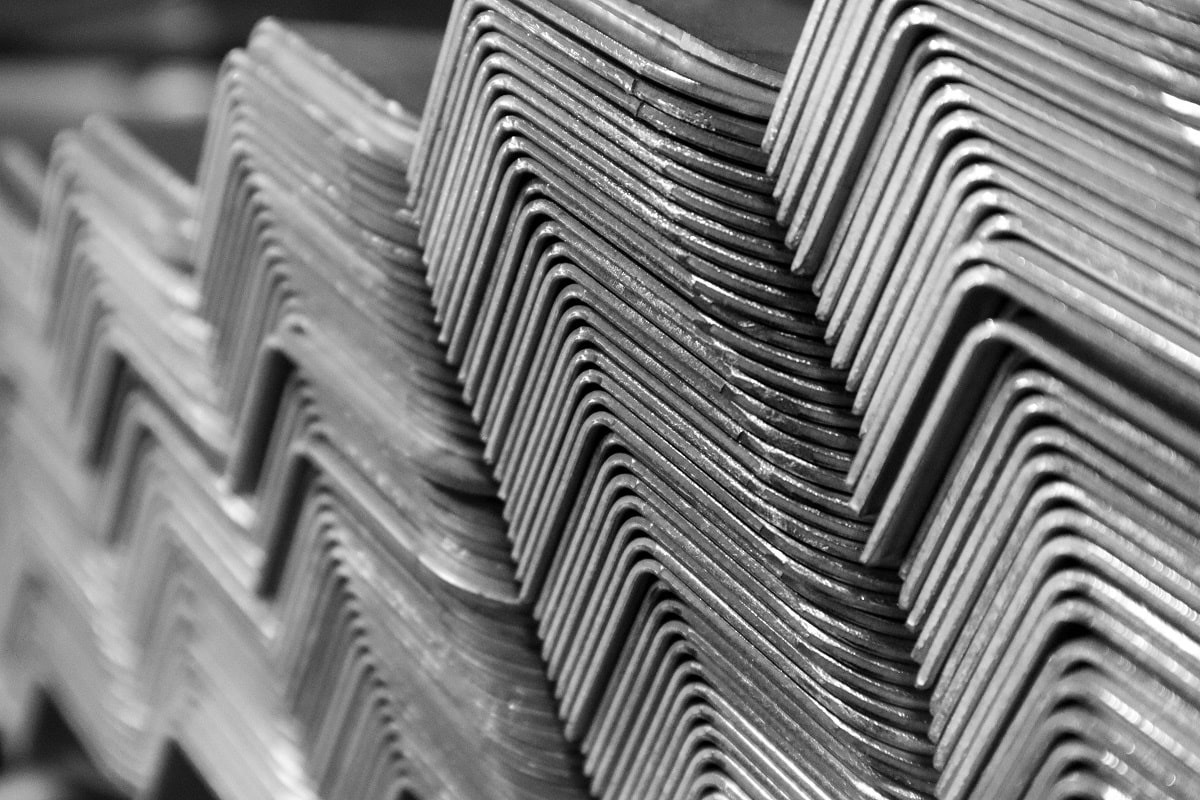 Let’s now compare the pros and the cons of metal stamping.

Advantages of metal stamping include:

On the other hand, there are also some downsides to metal stamping. Disadvantages of stamping include: 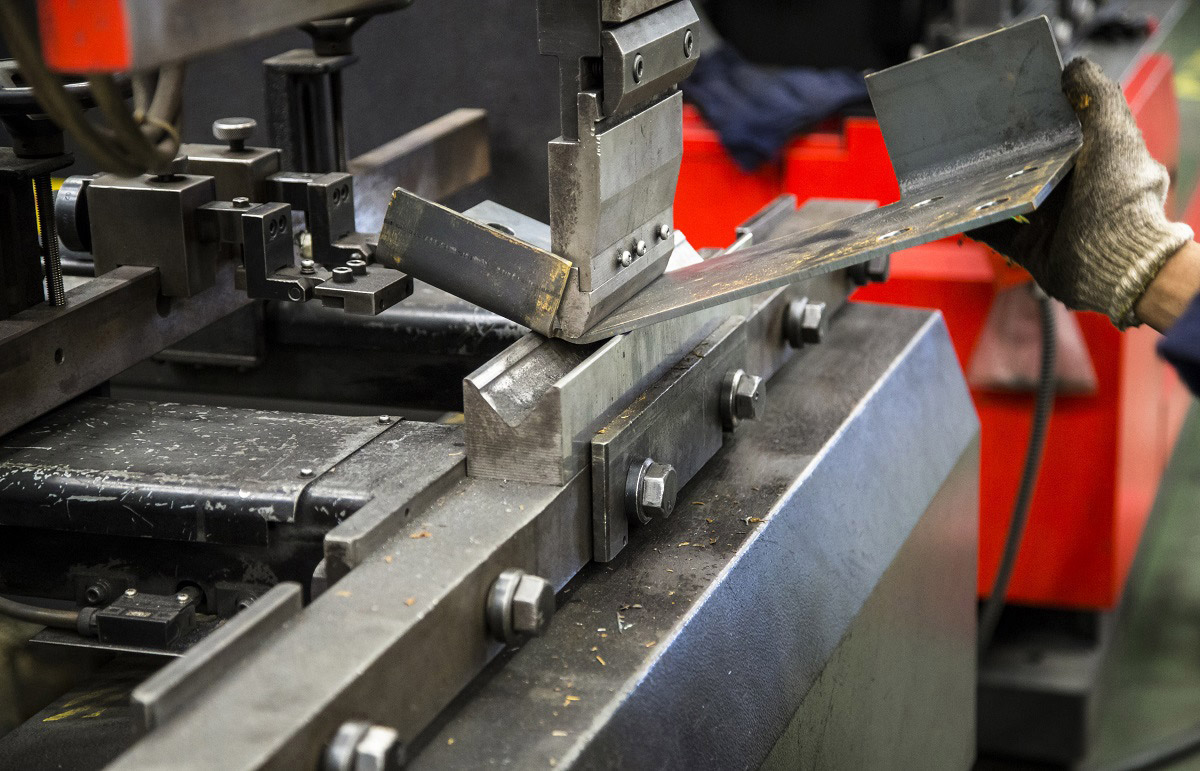 Now that we’ve covered the basics of metal stamping, let’s look at how this process is used and applied. It is used in a variety of ways, especially for the creation of three-dimensional designs. Chances are high that there are appliances or light fixtures in your home that were created through metal stamping.

Metal stamping is a widely used process that has applications relevant to your daily lifestyle. If you’re interested in learning more about metal stamping or any of our other metal capabilities, Schaumburg Specialties is happy to assist you.

We’ve been serving the Chicagoland area for decades, and we’re looking forward to helping you next. Fill out our contact form, and our team will be in touch with you soon!